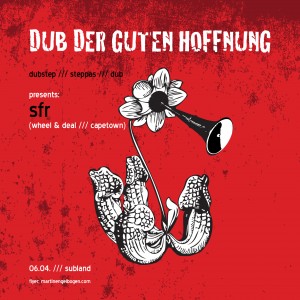 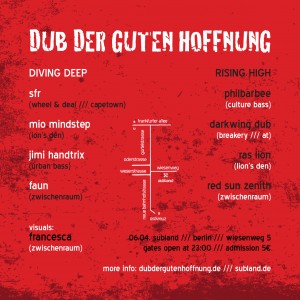 Following a one month tour with Roommate of the legendary US dubstep duo Babylon System, Dub der guten Hoffnung returns to Subland with one of South Africa’s foremost figures in the bass music scene, straight from the Cape of Good Hope… !

Recently voted by DJ Mag as one of the top 5 Dubstep DJs / Producers in South Africa, SFR has served as the „go-to guy“ for quality bass music in Cape Town for many years ! His productions can be found on a wide range of internationally acclaimed labels, such as Roommate’s „Hollow Point Recordings“ or London based „Trouble On Vinyl“ or „Zombie Recordings“. His recent signing to N-Type’s „Wheel & Deal Records“ is proof of his quality productions, which often combine stomping bass lines with fast-paced African drum rhythms, creating a unique sound within the genre, geared for the dancefloor while staying true to his African roots.

Over the last 7 years, SFR has built up a solid reputation as the “go to guy” for quality South African Bass Music. A testament to this is his extensive discography of 12” vinyl releases on international labels including the massive UK-based imprints, Trouble On Vinyl and Zombie Recordings.

In 2008, the signature SFR sound began to evolve and he took on the dance music behemoth that is Dubstep. He has since focused on developing a unique style within the genre by adding a unique South African influence to a heavy bass-led sound, with emphasis aimed squarely at the dance floor. This has proven successful and again saw SFR line up a string of vinyl releases on UK and US based labels including Guinea Pig, Grid Recordings, Hollow Point and W10 Recordings.

Last year saw SFR work closely with a few renowned South African artists including Jack Parow and Van Coke Kartel, amongst others. He’s the producer behind Jack Parow’s smash hit “Byellville” and officially remixed Van Coke Kartel’s single “Ondier Kom” off their “Skop, Skiet en Donder” album. Aside from being a studio wunderkind, SFR has also made a name for himself in the world of performance. He’s played electrifying sets across South Africa and has toured Belgium, France, Germany, Sweden and the UK on numerous occasions since 2007.

Having just signed a new single to N-type’s Wheel & Deal Records, things can only get bigger for this South African talent.