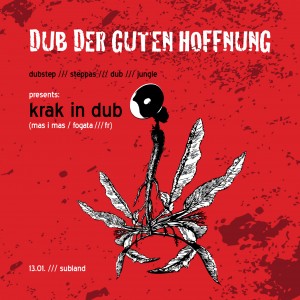 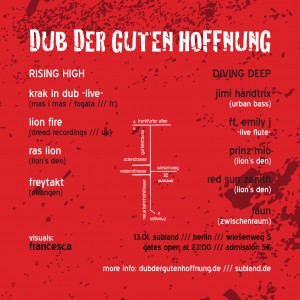 After a stunning last show of the year, we set off into the new year with another special! Switching things up, we bring di fiyah back to the main floor, welcoming long time patrons of the French breakbeat / jungle / dub scene KRAK IN DUB, as well as one third of the legendary LionFire from the UK!

wicked visuals by:
Francesca aka Krystollsowlz

Pure roots reggae junglist, Krak in Dub has come a long way from his early days as one of the original pioneers of the junglist movement in France. Now working with Jamaican legends such as Capleton and Demolition Man, and laying down screaming riddims and blazing basslines, he’s harnessed the original junglist free flow spirit, throbbing with roots and the soul of reggae into improvised liveset. Kicking dancefloors and putting the hardiest sub bins through their paces, he’s bringing the sound global, from South America to Eastern Europe earning full throated respect from the cream of Jamaican artistry and inspiring a whole new generation to embrace the junglist movement.
… but this is not all to it… styles range a lot further… from rubadub to steppas to dubstep… to sum it up: finest BASS MUSIC!

LionFire is a trio of producers (Aries, Gold and Jinx) from the Midlands.
The act was formed in 2005 by Aries and Gold, the two instantly hit it off and there 1st track ‘Sleng Ting Mash Up’ was picked up by Upfull Rockers and instantly signed to their Dub Dimensions imprint. This then followed with a hand full of tracks on Boss Tunes and in 2008 they welcomed producer and old friend Jinx to the crew before being signed to Dread recordings in 2010.

The three have recently put together an EP due to be released later this year on Ray Keith’s long standing imprint as well as having various tracks featured on ‘Dub Dread 4’ and a heap of things in the works!