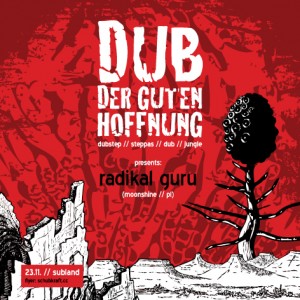 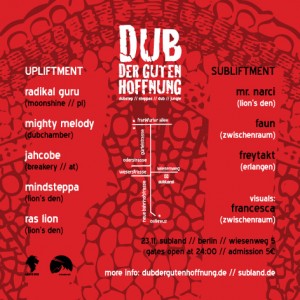 This time we go on a journey that has long been awaited. We are more than proud to present RADIKAL GURU from Gdansk, Poland. Heavy vibeZ and musical sweets guaranteed!!! This will be a very special show with one of the leading greats in ROOTSTEP music…
di Lions are coming in hotta fire blazing.
sound experience is amazing.
dub music blasting thru di speaker,
di righteous shall prevail, wicked get weaker
positivity is a must,
positivity will last…

Radikal Guru aka Mateusz Miller is a producer and dj born in northern Poland well known for his reggae-dubstep mash ups and unique sound influenced by dub originators such as King Tubby, Lee Scratch Perry or Scientist. He gained popularity after releasing a series of vinyl singles on Dubbed Out records (UK) in 2008.

He started developing his production skills in Poland making trip-hop and jungle beats in 2004. Fascinated by sounds of Asian Underground in 2005 he put’s out a demo album called „The East-West connection“ which started spreading around internet community. In 2005 he moved to Cork (Ireland) where he continued expanding his production techniques and started getting more attention by dropping his dj mixes in clubs around Ireland.

During that time Radikal Guru sound progressed further when he started experimenting with dub and wide variety of sub genres including dubstep. In October 2008 he had his first tunes released by Z-Audio’s sister label Dubbed Out records and only after few months he got a lot of attention from listeners around the globe and his music was played in radio stations like BBC Asian Network, Sub FM, Rinse FM, Sensimedia Network and many more. From 2009 Radikal Guru is delivering his sound in clubs and festivals around Europe and continues his quest to this day. In September 2011 he released his album ‚The Rootstepa‘. And since then things just go mad – remixes, releases, shows, … 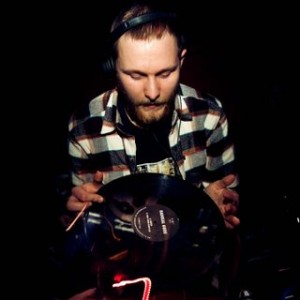 (//latest news//)
Moonshine Recordings and Steppas Records have joined forces to bring you a collaborative release featuring some of the most current and exciting names in dub and bass music. Both labels are deeply involved in the current dub scene and their knowledge, respect and understanding of the music and its historical roots mean they are perfectly positioned to provide a release that has both depth and intense musical skill.

Moonshine Records have worked with Radikal Guru and Cian Finn previously, on the well-received Rootstepa album and Rootstepa Remixed EP and that relationship and connection is clearly apparent here. Watch out for Finn’s deeply emotive lyrics on ‚9 Years‘ where he transforms a great dub tune into a powerful meditation on the cost of war. Finn and Guru work seamlessly together and it’s a testament to all involved that the tracks work just as well with pure dub or vocals. On the flip side, currently being subject to extensive rewinds by some of the most respected DJs in dub, dubstep and international bass music alike, ‚Ireland‘ has anthem written all over it. And with versions and dubs from all of the above artists this release is simply not to be missed.

‚Moonshine Steppas Present the Unified Power of Radikal Guru, Cian Finn, Alpha Steppa & Dub Dynasty‘ is sure to find its way into the record boxes of every bass loving man, woman and child around the globe. 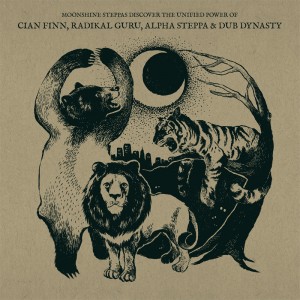